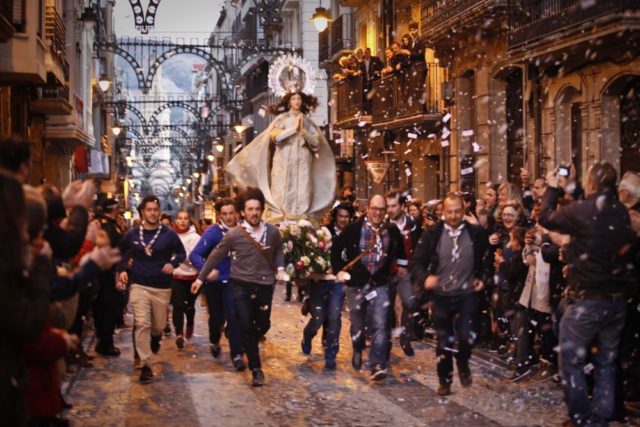 Holy Week is one of our most symbolic and popular festivals. Religious celebrations and traditions take place in each city and villa, but many of these include specific and differential acts that have become traditions. In Alcoy there is the famous parade of the “Xiulitets” and the Glòria, in Easter Sunday, which starts Moors and Christians festivities. In Bocairent a Renaissance Fair of great popularity and, in Alfarrasí, to the north of Ontinyent, the act of “l’Angelet de la Corda“. And, of course, the famous Easter “Mona”.

In this article of Carbonell Real Estate, we present you how Holy Week is lived in the cities and villas of Costa Blanca Inland.

In the Vall dl’Albaida, Holy Week is also lived with great intensity. In Ontinyent, the capital of the region, tradition and festivities are lived with emotion. Among all the acts highlights the “Night of the tambourines“. At midnight children and adults gather in the “San Roc” square with tambourines, “xiulitets“, rattles and drums to sing the hymn “Gloria“. They must make as much noise as possible to celebrate with joy the arrival of Easter. Holy Week is a perfect opportunity to know everything that Ontinyent offers. For example, visit its Bell Tower, the highest in the Valencian Community.

20 kilometers north of Ontinyent, is the villa of Alfarrasí. Among its official acts for Holy Week, highlights “L’Angelet de la Corda” on Easter Sunday. In this act, declared of Tourist Interest in 2017, a girl turns into an angel and flies all over the town square to remove the black veil from the Virgin.

In Bocairent, at the foot of the Sierra de Mariola Natural Park, the traditional Easter Fair is celebrated. From Holy Friday to April, 2. This year, they have expanded the area and it has become a Renaissance Fair. It is expected to attract thousands of tourists for the variety of gastronomic products, traditional games and quality craftsmanship.

In the city of Alcoy, the most popular and characteristic events take place on Easter Sunday. Very early is celebrated the parade of “dels Xiulitets, in which the alcoyanos sound the “xiulitets“, small whistle full of water. This procession is also special because it marks the beginning of Moors and Christians festivities: that same day the first act of these is celebrated, known as “La Glòria“. A representative of each of the 28 “filaes” of Moors and Christians festivities go to the streets with their impeccable costume. From this moment, Alcoy already breathes festivities.

The Holy week in Cocentaina is booming. It begins with the Blessing of Palm and Branches and the living representation in the form of a theater of the Passion of Christ. Even so, the most popular and traditional celebration is to visit, on Holy Thursday, the decorated altar of all the Churches of Cocentaina. The custom is to make this route with family and friends to enjoy it even more. The contestants end Holy Week with official acts and great participation in front of the Palau Comtal.

And we end with another of the most special celebrations in Costa Blanca Inland. The Easter “Mona”. Unlike other parts of Spain, the Valencian “Mona” is a bun similar to the “Roscón de Reyes”, but with different shapes. They also carry an egg right in the center of the “Mona”. The custom is to celebrate the Day of the Mona in the field with family and friends. Also, in Alcoy, it is a special day because mark the beginning of the parades of Moors and Christians festivities.

In Carbonell Real Estate we do not only look for your villa. We will also inform you about everything in Costa Blanca Inland: its traditions and festivities.